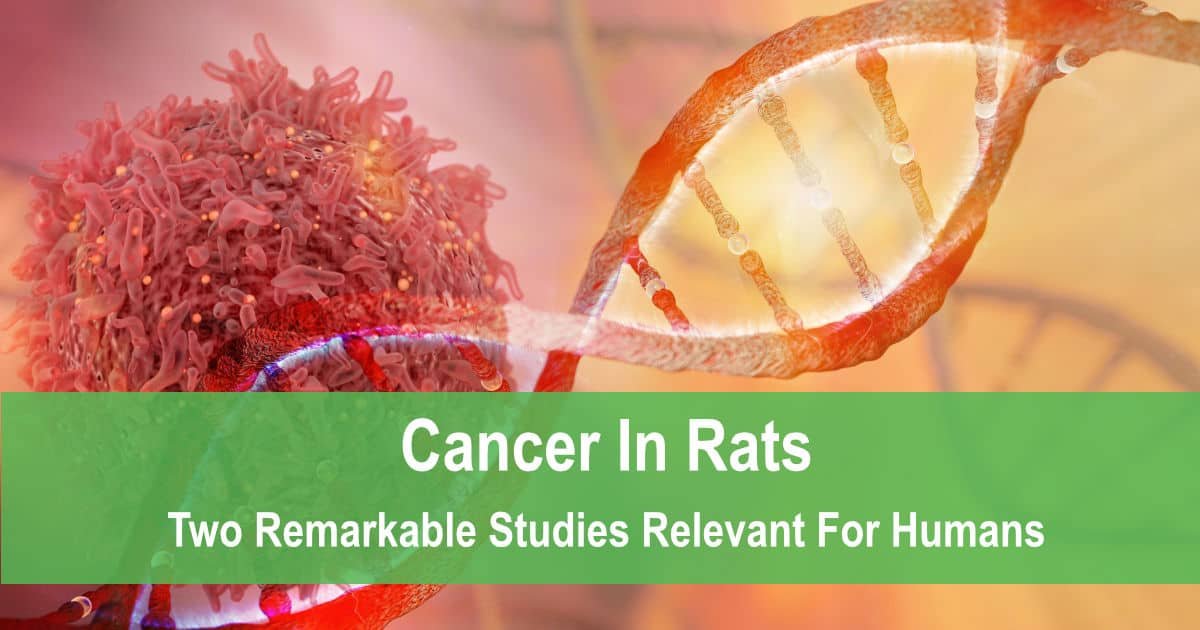 The two studies we’re about to discuss, show that cancer in rats is determined mainly by the amount and the type of protein consumed. Both studies show that nutrition plays a key role in cancer in rats, especially plant versus animal foods.

The first study was performed in India.

The Experimental Cancer in Rats Study in India

In the India study, two groups of rats were given different levels of dairy protein (casein). One group was going to consume 20% protein (high protein group), the other group 5% protein (low protein group). Both groups were also given the carcinogen aflatoxin.

So what happened to the two groups?

Of the 30 rats that were part of the high protein group, half developed tumors, and the other half had precancerous lesions.

Of the 12 rats that were part of the low protein group, one developed a kidney tumor, and the rest did not develop tumors or precancerous lesions.

This was a remarkable outcome and a reliable indicator that the development of cancer in rats is determined mainly by nutrition. The research suggested that nutrition has more power than carcinogens like aflatoxin.

Upon reading about the India cancer in rat’s studies and its conclusions, Dr Campbell set out to repeat and do more variations of the same research. More remarkable insights would follow.

Turning Cancer in Rats On and Off

The study showed that the high aflatoxin, low protein group had fewer foci than the low aflatoxin, high protein group. Foci are tiny clusters of cancer-like cells, an early indicator of tumor formation.

Then the researchers went one step further. Again, two groups of rats started with a 5% and 20% protein and given the same amount of aflatoxin. Both groups would alternate their level of protein intake during a 12-week period.

Like flipping a light switch on and off, we could control cancer promotion merely by changing the levels of protein, regardless of initial carcinogen exposure.

The research then went a little further than solely focusing on the early indicators of tumor development (foci). In this next part of the study, actual tumor formation would be measured. Several hundred rats were part of the study. The study was 100 weeks in length. Rats generally live 2 years, so the study would roughly span the lifetime of a rat.

All these variations and variables confirmed that the initial India study was not a fluke. Indeed, regardless of carcinogen exposure, cancer in rats could be turned “on” and “off” simply by switching the level of protein intake.

What About Protein From Plant Foods?

In the experiments, both the 5% and 20% plant protein groups did not promote cancer cell growth.

More studies were then done on rats and other animals, with different types of cancer and various nutrients, including fish protein. The results would remain in line with Dr Campbell’s cancer in rats studies:

Why Would These Studies be Relevant for Humans Too?

Even though these studies were done on rats, they may still be relevant for humans because the human body has a similar protein need than the protein need of rats.

Also, protein metabolism works roughly the same in rats and humans. Another reason for human relevance is that the levels of protein given to the rats are similar to the levels humans generally consume.

Dr Campbell would soon have an opportunity to participate in a large-scale human study, which gave many more insights about the relation between diet and disease. It is called The China Study.

This article is an excerpt from page 27-67 of The China Study by Dr. Campbell.