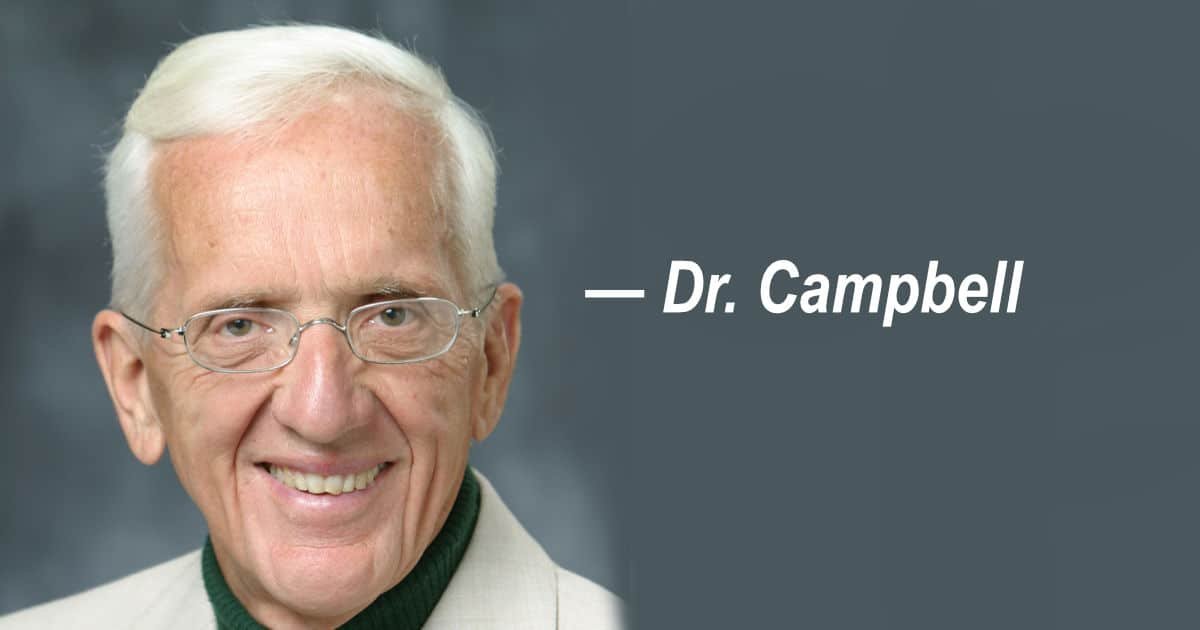 Through all of this, I have come to see that the benefits produced by eating a plant-based diet are far more diverse and impressive than any drug or surgery used in medical practice. Heart diseases, cancers, diabetes, stroke and hypertension, arthritis, cataracts, Alzheimer’s disease, impotence and all sorts of other chronic disease can be largely prevented.

The Story of Dr Campbell

Dr Campbell’s background predicted quite a different life, which makes his story all the more profound. He grew up on a dairy farm with the idea of cow’s milk being nature’s perfect food and essential for health.

His Ph.D. research was focused on finding ways of growing cows and sheep faster. He very much recognized another common notion: Animal protein intake is the crucial factor for good health.

His approach to healthy food focused on the promotion of animal products ( meat and dairy). A life meant to be, given that he had grown up on a dairy farm.

Dr Campbell later traveled to the Philippines as part of a project that focused on dealing with childhood malnutrition among the poor. The common notion was that a lack of (animal) protein caused malnutrition. And so the goal was to give children as much protein as possible.

Another part of the project was to investigate liver cancer, which was very common among children. It was suspected that the unusually high rates of liver cancer were due to the high consumption of aflatoxin (mold toxin found in peanuts and corn). Aflatoxin was considered to be one of the most potent chemical carcinogens that ever existed.

What followed was a turning point in Dr Campbell’s assumptions.

During the project, Dr Campbell was surprised to find that the children with the highest intake of protein were the most likely to get liver cancer. Lower intakes of animal protein were associated with lower rates of liver cancer.

Simultaneously and coincidentally, he also came across a research report from India, in which two groups of rats were given the cancer-causing aflatoxin. One group consumed a diet of 20% protein, the other group 5% protein.

What protein consistently and strongly promoted cancer? Casein, which makes up 87% of cow’s milk protein, promoted all stages of the cancer process. What type of protein did not promote cancer, even at high levels of intake? The safe proteins were from plants, including wheat and soy.

Dr T. Colin Campbell became curious, but remained cautious, as he continued his inquiry into the link between cancer and animal protein. He went on to be a part of two major types of research: One involved animal studies, in which he repeated the cancer in rats studies, and the other was The China Study.

The China Study brought a stunning 8,000 significant associations between various dietary factors and disease. It was called the “Grand Prix of Epidemiology” by the New York Times. The findings of both the animal studies and The China Study were consistent with earlier suggestions.

Dr Campbell’s curiosity brought him to the unexpected insight that was no longer a coincidence: An animal-based diet is the biggest contributor to many of our common diseases (including cancer, diabetes and heart disease)

Dr Campbell’s honesty, integrity, and persistence in doing scientific research and in sharing this very challenging view make him one of the most well-respected individuals in the field of nutrition and health. So many people have opinions about which foods are best for our health, but Dr Campbell’s view has its foundation in genuine scientific research.

In the introduction of The China Study, he says:

Even though information and opinions are plentiful, very few people truly know what they should be doing to improve their health. This isn’t because the research hasn’t been done. It has. We know an enormous amount about the links between nutrition and health. But the real science has been buried beneath a clutter of irrelevant or even harmful information – junk science, fad diets and food industry propaganda.

His findings have been consistent, which is what makes this research truly revolutionary, groundbreaking, and breathtaking. Its dietary recommendation is simple but profound.

The China Study can take you on a ride toward better health. Indeed, a whole food plant-based diet can prevent and reverse cancer and many other chronic diseases.

So, what is my prescription for good health? In short, it is about the multiple health benefits of consuming plant-based foods, and the largely unappreciated health dangers of consuming animal-based foods, including all types of meat, dairy and eggs.

Want to read about the other insights of The China Study? Purchase The China Study book and specifically read through pages 69-108. In this article, we’ve made an attempt to provide you with a general overview of the China Study. Also, take a look at Dr Campbell’s cancer in rat studies. The insight of that research led him to the China Study. Both studies point in the same direction: The more whole plant foods, the better.

Besides The China Study, Dr T. Colin Campbell is also the author of Whole and The Low-Carb Fraud. He featured in the following documentaries: Forks Over Knives, Eating You Alive, Food Matters, and PlantPure Nation.  Also, take a look at T. Colin Campbell Center for Nutrition Studies, founded by Dr. T. Colin Campbell. Its website includes articles, recipes, and an online plant-based nutrition course featuring Dr. Campbell, Dr. Esselstyn, Dr. Greger, and many others.